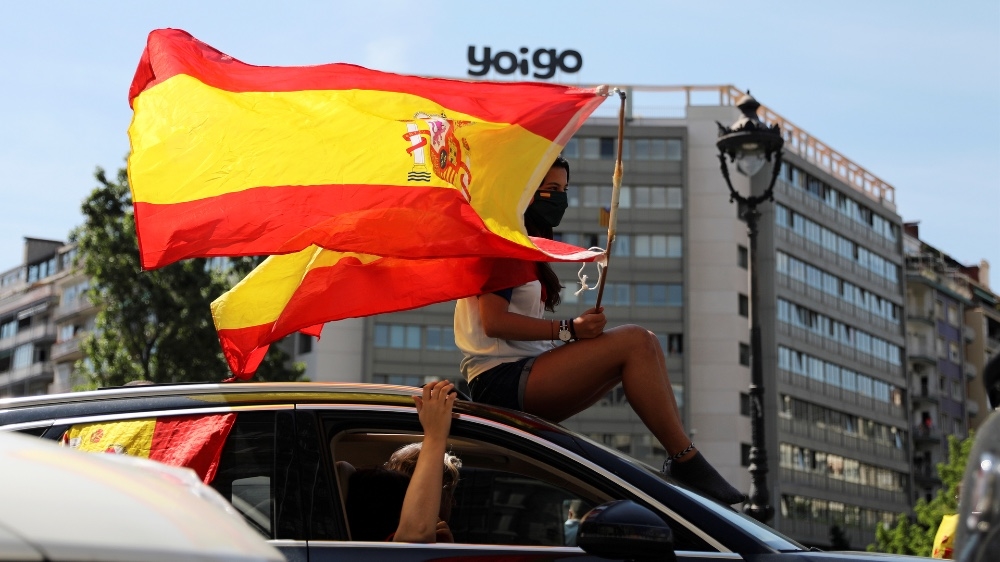 Thousands of anti-government protesters led by the far-right Vox party have taken to the streets across Spain, demanding an end to the coronavirus lockdown and the resignation of the country's leaders.

Saturday's mobile rallies in Spain's 50 provinces - including the capital Madrid, Barcelona, Malaga - saw demonstrators driving their cars in a procession or riding motorbikes, as they honked and hoisted Spanish flags.

It was part of growing opposition to the state of emergency which parliament recently extended for another two weeks. Spain is one of the worst-hit countries by the virus, with more than 28,000 dead among nearly 235,000 infections [Jon Nazca/Reuters]

Al Jazeera's Marta Herrero, reporting from Madrid, said the protesters in the capital where mainly adhering to the safety guidelines, wearing face masks and keeping a safe distance from each other.

She noted the anti-lockdown sentiment has started earlier 'as an isolated movement in a very wealthy, rich neighbourhood here in Madrid, with people banging pots and pans at nine o'clock'.

Herrero said anger gradually grew over the alleged mishandling of the coronavirus crisis by the government.

'They [protesters] are saying that the government is using the state of emergency to gain power and take away civil liberties,' she added. Spain is one of the countries hardest hit by the virus, with more than 28,000 dead among nearly 235,000 infections.

Authorities are set to ease more coronavirus restrictions on Monday, including in Madrid and Barcelona. The two cities account for almost half of the cases recorded in the country.

Outdoor dining and gatherings of up to 10 people will be allowed from next week. Some schools will restart in other areas. Cinemas and museums can also reopen, but only at a third of their capacity. Do we have to sacrifice our privacy to fight the coronavirus?