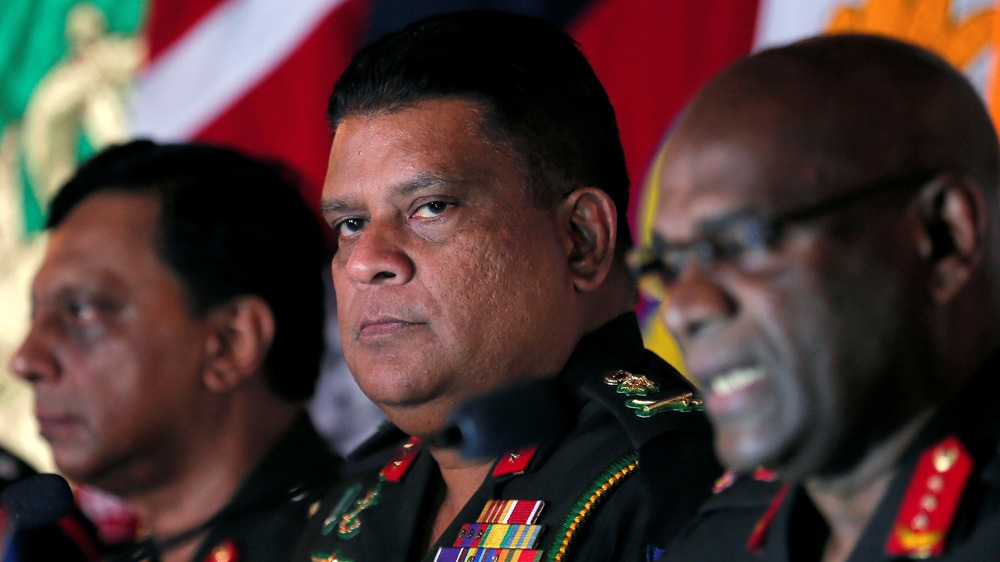 Major General Shavendra Silva, who on Monday was also promoted to the rank of lieutenant general, was in charge of an army division that encircled the final stronghold of the Tamil Tiger rebels in the final stages of the war that ended a decade ago.

Silva's 58th division has been accused of violating international human rights laws, including shelling a hospital. Silva, 55, has denied the accusations.

'I am deeply troubled by the appointment of Lieutenant-General Shavendra Silva as Commander of the Sri Lankan Army, despite the serious allegations of gross violations of international human rights and humanitarian law against him and his troops during the war,' the UN's High Commissioner for Human Rights (OHCHR) Michelle Bachelet said in a statement on Monday.

The United Nations has estimated that some 45,000 ethnic Tamil civilians might have been killed in the last months of the war, while other estimates put the number much higher.

The International Truth and Justice Project, a group seeking accountability for wartime abuses, said Silva's appointment was 'immensely damaging to the country'.

'After so much bloodshed Sri Lankans need to hold their leaders accountable in order to stop the repeated cycles of violence,' Yasmin Sooka, the organisation's executive director, said. 'Silva's promotion, however, sends a message of total impunity.'

The group also noted that Silva's appointment was made months before presidential elections are scheduled to take place in December.

Former Defence Secretary Gotabaya Rajapaksa is hoping to run for president. He is also facing allegations of war crimes over his role in guiding Sri Lanka's war against Tamil rebels a decade ago.

In a 2015 UN report published by the OHCHR, Sri Lankan forces were accused of grave abuses that included unlawful killings, sexual and gender-based violence, torture and attacks on humanitarian facilities.

According to the report, the army division led by Silva shelled a hospital and a UN hub in Putumattalan, a city they were tasked to recapture from the Tamil Tigers.

The OHCHR alleges that during the last months of the offensive, hospitals were shelled repeatedly, during which patients were forced to escape, some even carrying their intravenous drips with them.

The attack on humanitarian facilities by armed forces were not 'isolated incidents', and 'in some cases may have deliberately targeted the facilities,' the report said.

The OHCHR noted that 'many of the structures responsible for the violations and crimes remain in place'.

The appointment of Silva, who in January had been promoted to the second-highest post in the country's military, was also criticised by the United States.

'This appointment undermines Sri Lanka's international reputation and its commitments to promote justice and accountability, especially at a time when the need for reconciliation and social unity is paramount,' the US embassy in Colombo said in a statement.

The government declared victory over the rebels in May 2009, ending the Tamil Tigers' long campaign for an independent state for minority ethnic Tamils. Both the Sri Lankan military and the rebels have been accused of wartime abuses.